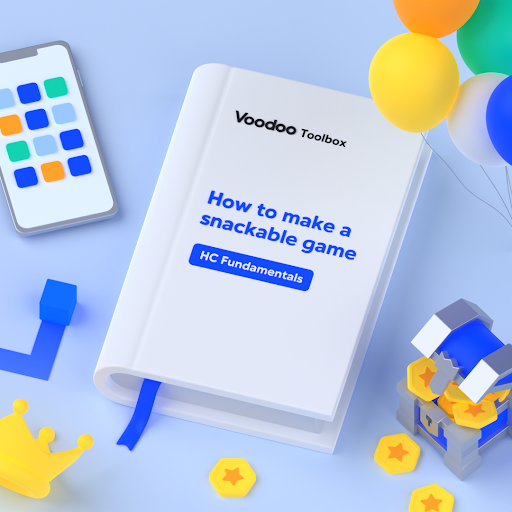 In this Toolbox series, we’re taking a look at the fundamentals of hyper-casual. What makes a game hyper-casual? What do you, as studios and developers, need to know when developing hyper-casual hits? What tips and tricks can you start using to help you hit the top of the charts? Whether you’re just starting out in hyper-casual or you’re looking to reinforce your skills, we’re here to help.

Today we’re diving into the core of hyper-casual: snackability. Read on to find out what exactly snackability means and how this concept can help you create a hit game.

The word snackability has been around pretty much ever since hyper-casual games started popping up in 2016. It’s a concept that we’ve always used at Voodoo to help studios and developers create hit games. But what does it actually mean? To put it simply, hyper-casual games are a lot like a snack. Let's think about a chocolate bar, for example. When you’re hungry or bored, you can eat a chocolate bar. It’ll usually be a super satisfying experience but will often leave you wanting more. And the same goes for hyper-casual games; they’re designed to be consumed quickly, provide a satisfying experience, but usually leave you wanting to play just one more level.

Over the years, we’ve boiled the concept of snackability down to three golden guidelines, what we call the three S’s: Short, Simple, and Satisfying.

The beauty of a hyper-casual game is that they can be played anywhere, at any time. When you’re walking down the street, waiting for the bus or the subway, waiting for a friend, or even just a little bored, you can get out your phone and play a hyper-casual game. When a user plays three, four, ten rounds or more, this will increase the scalability of the game and will favour its monetization.

In terms of player experience, short games require less effort from the player, but can equally create more pleasure as you generate more rewards on a more frequent basis.

⚡️ Top Tip: Gameplay length should be between 30-45 seconds long. This is the ideal amount of time because any less and the player won’t have enough time to get into it. Any more is a risk as they could get bored.

Short and simple are fundamentally connected in hyper-casual, you can’t have one without the other when creating prototypes. Short sessions won’t work if your gameplay is not simple enough for the player to understand. If you have a very clear and understandable objective and a straightforward, well-executed mechanic, your game will be accessible for any player, at any time of the day.

Let’s take the example of a player waiting for a bus. When a player picks up the game, if it takes more than 30 seconds to understand how to play, by the time they start getting the hang of it then the bus will have arrived and it’ll be too late.

⚡️ Top Tip: To make your gameplay as simple and understandable for the player right away, make sure your game objective is as clear as possible and your mechanic super easy to pick up and play.

The last thing on your snackability checklist is whether your game is satisfying enough. If snacks didn’t taste nice, no one would bother eating them, and the same thing goes for your hyper-casual game; it’s got to be fun, satisfying and exciting to play.

There are two key ways that you can do this. The first relates back to short but fast-paced gameplay sessions, as the player will be rewarded much more frequently than on other mobile games. The second is to make your game dynamic, which comes down to UI elements as well as animations and effects such as power-ups or confetti. These small bursts of visual satisfaction will make your game generally more rewarding, even if the player fails the level.

⚡️ Top Tip: Your hyper-casual game needs to be constantly and consistently satisfying for the player - so make sure you focus on rewards when coming up with your gameplay.

So there we have three essential elements of a snackable game and top tips on how to implement them. To check out some concrete examples from some hyper-casual hits, read on! 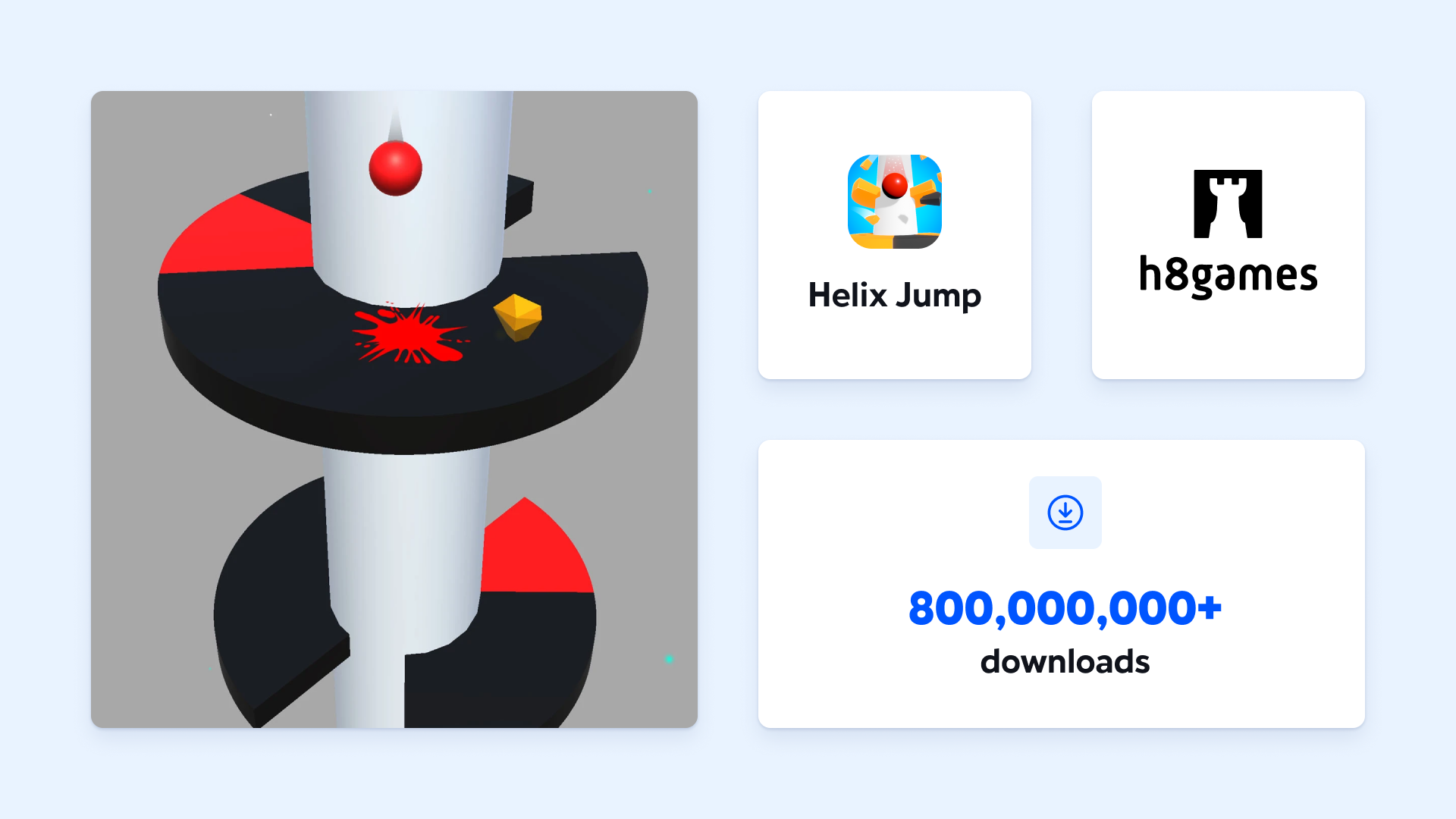 Helix Jump was published in 2016 and is, to this day, one of hyper-casuals biggest success stories. The game has now racked up over 800 million downloads since launch and reached #1 in 129 countries on iOS and 72 on Android. It was developed with these three concepts in mind.

Short: The average level length is around 30 seconds. These short sessions engage players quickly and efficiently, whilst encouraging them to play another level to build their skills.

Simple: The game is super intuitive and it’s super obvious from the get-go that you have to drop through the holes and avoid the red platforms. The highly contrasting visual elements help do this, and the easy swipe mechanic can be picked up immediately.

Satisfying: The game is designed to provide constant rewards for the player. It’s super dynamic as the ball is constantly moving; it keeps bouncing even when you stay in the same place. Every time you bounce there’s a splash of paint that gets bigger with each bounce, and there’s a strong risk/reward element. If you drop several platforms at once, the platform explodes, creating another visually satisfying experience. 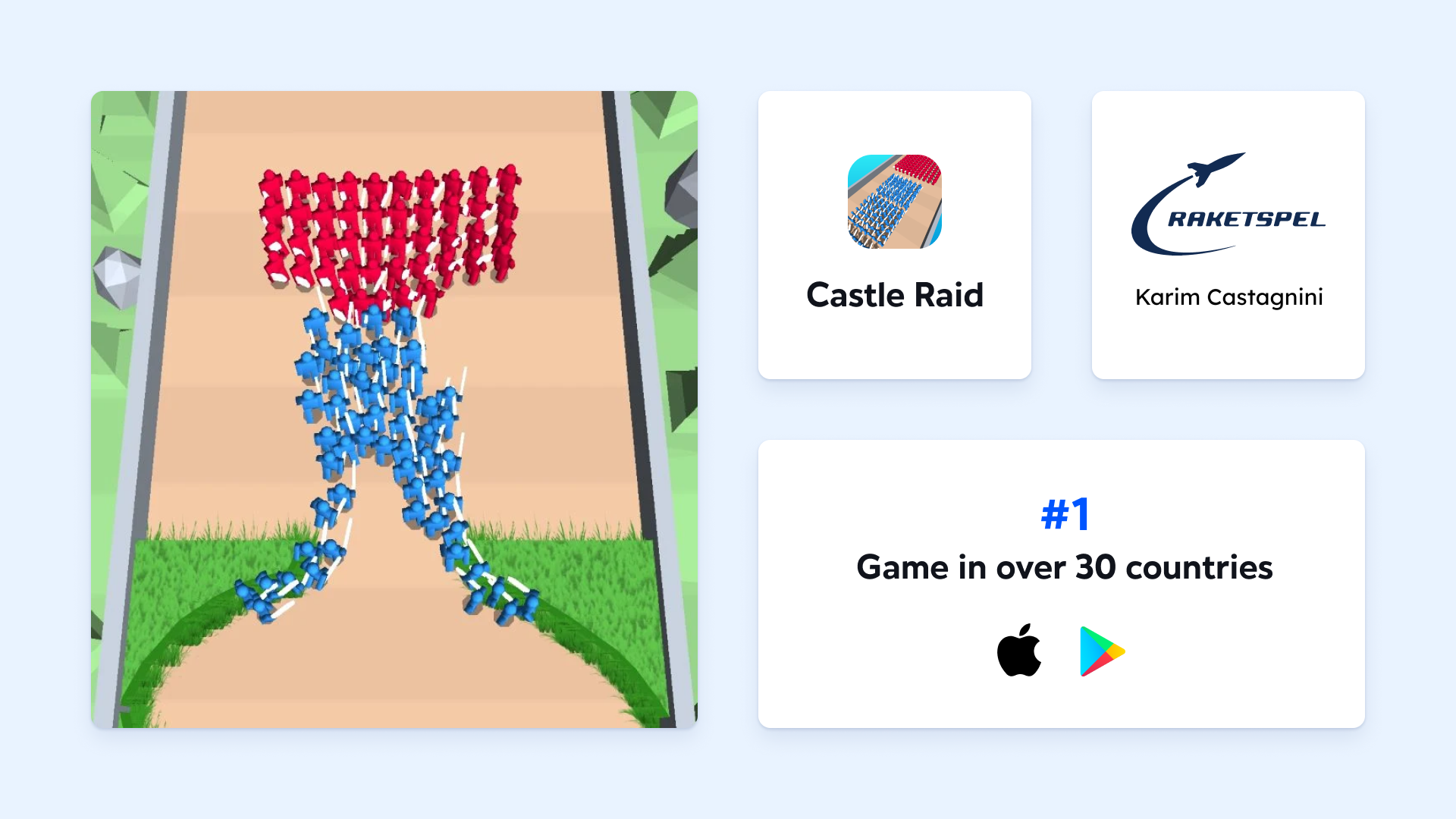 Castle Raid was released in summer 2021, but has already racked up over 12 million downloads and reached #1 in 16 countries on iOS and 23 countries on Android. If we check the gameplay, we see the same three elements as in Helix Jump, showing that these golden rules are as true today as they were back in 2016.

Short: The average session length for Castle Raid is again around 30 seconds, which allows the player to pick up on the gameplay super quickly and not get bored during each level. Each level also has a short engagement time, as the player draws a path through the grass and then gets to sit back and watch what happens.

Simple: Castle Raid uses a simple swipe control which is super easy to pick up, and the multiplier boosts stand out with strong visual contrast.

Satisfying: Just like in Helix Jump, we can see constant visual rewards for the player, notably with the multiplier mechanic, the battle between the two armies with splats of colour for each death, and the level-end. The act of drawing to cut through the grass also incorporates the satisfying cutting mechanic which has become increasingly popular over the past year.

So there we have part one of our series on hyper-casual fundamentals with all you need to know on snackability. Stay tuned for part two!

To gain access to extra tips, tricks, and case studies on snackability, head to our exclusive knowledge platform for partner studios.