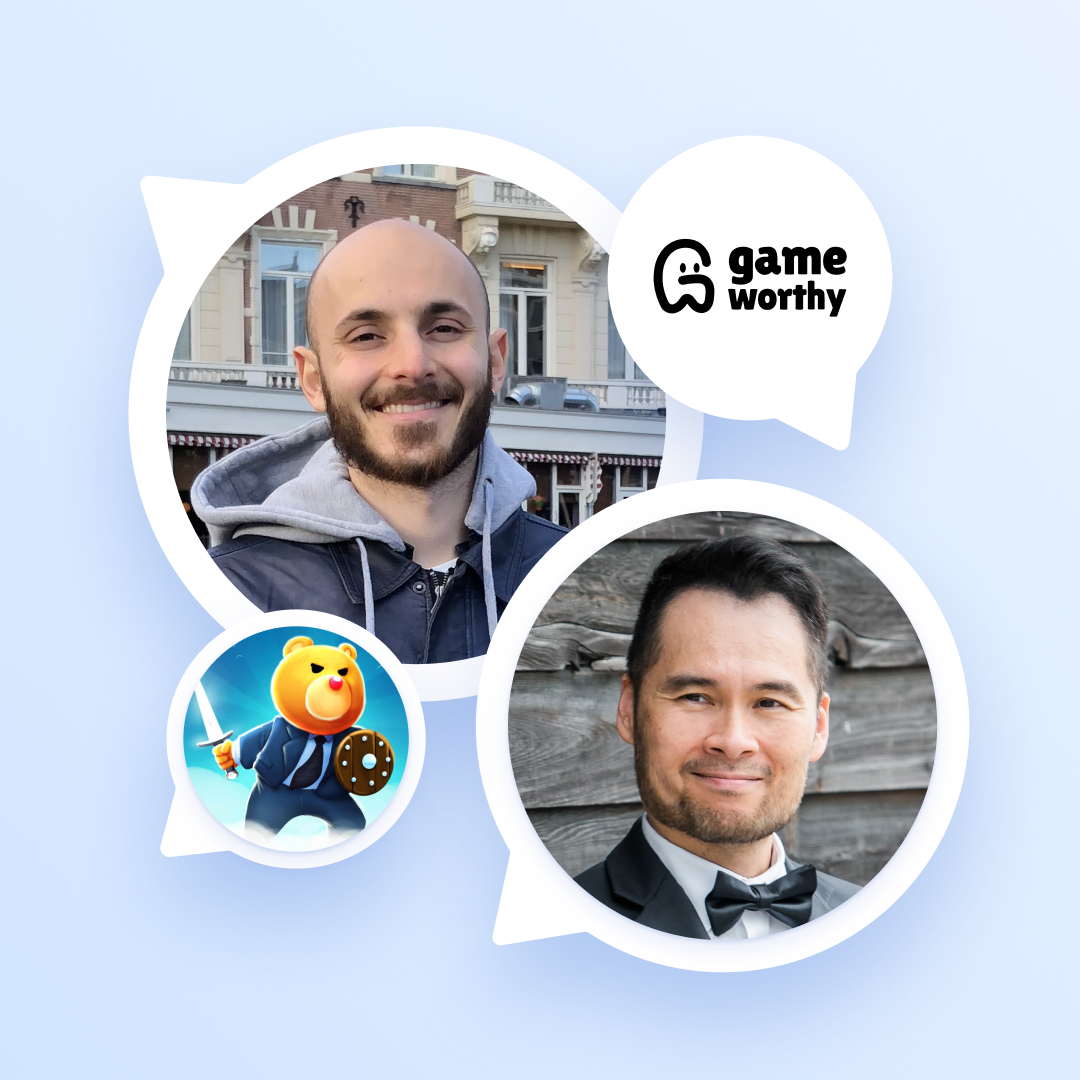 Game Worthy are the studio behind the recent hit City Takeover, a super original hyper-casual game that entered the top charts directly after its release. Following their success, we organised a live Q&A with studios and developers from around the world to answer all your questions. Kaue and Fred from the team shared some super useful insights on how to create a hit game, including their ideation process, game art, and their advice for young studios looking to make their first hit game! Read on to find out more, or check out the replay here on our e-learning hub!

Could you tell us about your studio and how you got into game development?

Kaue: We’re based in Vancouver, Canada and I quit my job about a year and a half ago to start Game Worthy! I’m the studio developer and programmer, I’ve been in the gaming industry for about eight years now.

Fred: I’m the Game Artist, and I’ve been in the industry for over twenty years now. I first started working with Kaue about two years ago at a different studio, and I joined Game Worthy at the end of last year.

What is your ideation process? How do you filter, generate, and fine-tune your ideas?

Kaue: Sometimes I’ll be watching a movie or playing another game, and I’ll come up with some ideas from that. Before Covid hit, I’d also get a lot of ideas just from being outside and looking around. Once I find inspiration, I start playing around with ideas and thinking about how these things could work in hyper-casual.

Fred: Kaue comes up with great initial ideas. I’ll get excited and do a mock-up for the game art, and more ideas will then spawn from that. If you can find something small that you’re really excited about, then you can start building on that. 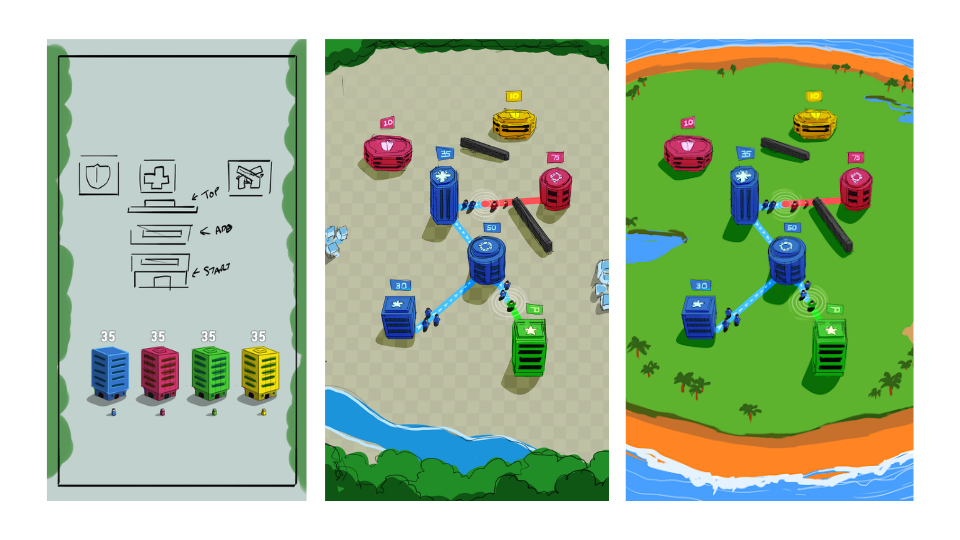 Kaue: Working with Fred is really useful, because once we have an idea that we both like, it’s very easy for us to communicate and change things. Once we already have a visual for the game, this makes us more excited about working on the game together. If you have an artist that can make these kinds of mock-ups, it’s super useful to see something early on, even before you have the prototype. You can totally see what the game will look like, and we tend to take it from there.

Fred: I agree, you don’t have to think of the whole game immediately, you can build on a little thing, like the game mechanic. You find something, add a theme to it, and the whole thing builds from there.

Huge congratulations for City Takeover! Where did the idea come from?

Kaue: I used to play a lot of flash games when I was a kid, and was super curious to see what kind of flash games were still in the market. They were pretty similar to what I used to play, and I started thinking about what a 2020 version would look like.  In the ideation phase, I like to come up with a whole bunch of ideas when I’m not working on a specific prototype. It’s funny because I’d actually written down the idea for City Takeover on a Google Doc, but I put it to one side and hadn’t opened it for like six months. When the time came to start working on a new prototype, I was looking through some old documents and was like, hey, yeah, this could be a cool prototype!

To adapt it to the hyper-casual space, we had to take the gameplay mechanics and simplify them as much as possible, whilst keeping some of the strategy elements. We also wanted to simplify the graphics to make it more friendly and inviting to a wider audience. This is where Fred came in!

To find out more about City Takeover and its journey from prototype to hit, check out this article right here on Press Start.

So what about the concept art? Can you explain a bit about how you work, Fred?

Fred: I’m a big fan of doing concepts and mock-ups, and actually I encourage everyone to do this. Even if it’s just rough sketches, this can really help improve your workflow.

In general, I like to draw familiar things, but add a twist so that it feels both unique and familiar. For the buildings in City Takeover, I was inspired by Lego bricks as they are bright, colourful, and charming. They helped create the light-hearted and fun feeling that we wanted for the game. Once I was happy with the buildings, I then started placing them in different environments to add some variety; including an island, a desert, lava, and ice.

A lot of people ask me about the bear head too, it’s become quite iconic. I was just imagining the setting and context, thinking of being in a city and having office workers running out of the buildings and trying to take over. This idea seemed a bit dull though, so I wanted to add a little twist and a bit of charm. It’s something people feel like they’ve seen before, but actually haven’t really. 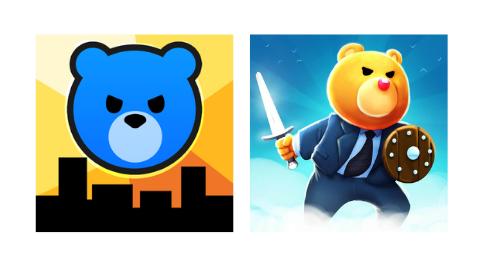 What was the timeline from the initial idea to prototype, and then to launch?

Kaue: I think it took us about two to three weeks for the first build. Usually, we try to stick to a rhythm of one build every two weeks, but we saw a lot of potential in City Takeover so we took a bit more time to create additional levels. The second iteration was super quick though, it took us about two weeks to come up with a whole bunch of ideas and Fred’s mock-ups really helped speed things up.

When you finished the MVP, did you feel like it was something special? Or just another prototype?

Kaue: I like to show the games we’re working on to friends to get a general feel of the game. They don’t necessarily pick it up and play it again. But when I showed them City Takeover, they were suddenly like "Oh, this is hard, I don’t understand it", but would keep playing the game! They were still be playing it after quite a lot of time, so we definitely realised it was something special.

🛠 Workflow and how to deal with failure

When starting with a new game idea, do you start with your project from scratch or have certain presets that you input and alter for your needs?

Kaue: As a programmer, I think it’s important to try and write your code so that you don’t tangle a logic code with gameplay very much.  For every prototype, we create new scripts and then put them in a side project that we can then use as a base for other games. For example, I used to spend a lot of time working on the UI for every prototype that we made, and realised that it looked pretty similar each time. I decided to decouple all the UI code from the game code and so now, whenever we start a new prototype, we don’t have to worry about the UI as it’s already there.

That’s just one example, but you can also do that with shaders, game logic skeletons, 3D meshes, and stuff like that. Rather than creating it all over again, you can just build on it, which helps save a lot of time. It’s great to have a base project that you can duplicate and go from there, but keep in mind that whenever you’re writing a new prototype, try and decouple as much of the code and assets as possible to try and salvage that for your next game.

How do you manage failure when prototyping?

Kaue: The first failures you get are pretty devastating because you do get super excited about game ideas. But I do think it’s part of learning that not all your games can or will become hits. For me, it's more about knowing that you’re getting better at the prototypes that you make. I always try to approach it with that angle, focusing on the fact that the next will have more potential because you’ll have more experience and therefore come up with better ideas… Personally, that’s what motivates me to keep going. However many prototypes it would have taken us to get the hit game, we were willing to do it.

Do you have any advice for young studios?

Kaue: For me, the most important thing is not to be discouraged by prototypes that don’t make it - although at the beginning I know this can be hard. Instead, try to look at them objectively and learn from there. You definitely get better and better the more prototypes you make, and eventually, you get there.

Fred: I  would say always try to be creative and keep things fresh. I’ve been watching Voodoo videos for the longest time, and one of the things Voodoo talks about is creating trends instead of following them. I really liked that and started coming up with really wacky ideas. Sometimes it works!

Thanks a lot for participating in the live stream! Do you have any last words or pieces of advice?

Fred: Just keep going for it really! Once you start thinking of failure as a learning experience, you can go really far.

Kaue: And a huge thanks to Voodoo for making this possible! The whole team was extraordinarily helpful. All the advice you gave us was overwhelming because we had no idea how much help you could provide. Once we reached the point where we found potential for publishing, you guys really came in and sorted everything out. It was incredible to see!

A huge thank you to Game Worthy for participating in the live stream, and congratulations on their first hit game with Voodoo.

Do you have a question you'd like to ask other studios? Sign up to our Publishing Platform to participate in the next live Q&A! 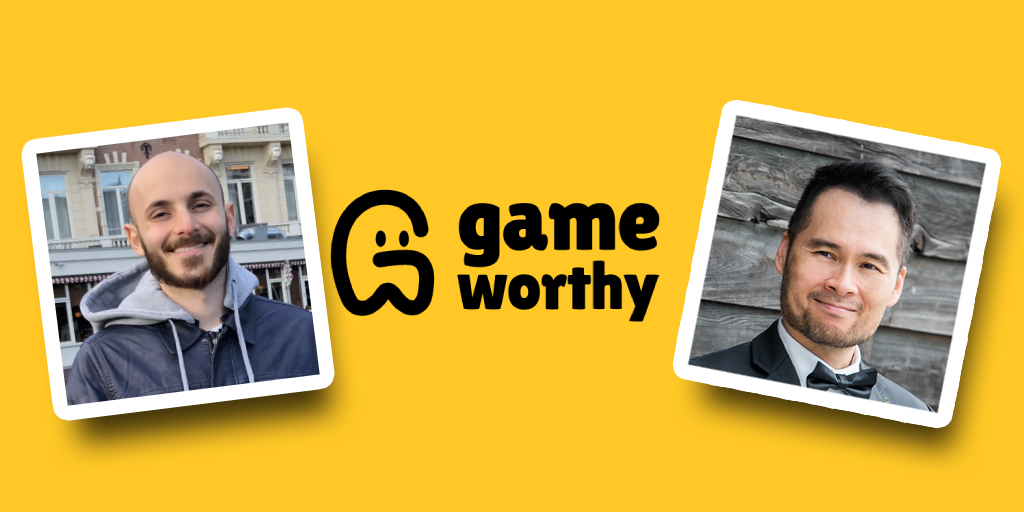