In December 2020, two young programming students called Harvey and Mathis founded Blue Monkey Studio. By September 2021,  only nine months later, their first hit game had entered the charts. Flex Run 3D reached number 1 in the Android charts in 39 countries, including the US, and number 2 on iOS US. But what’s the story behind this super speedy success? How did they go from hyper-casual beginners to the top charts in just nine months?

The two co-founders, Harvey and Mathis, joined us at the recent Voodoo Live event in Paris to reveal exactly how they managed to bag their first hit game in such little time. Read on to find out more about Flex Run 3D and their three key secrets to success. 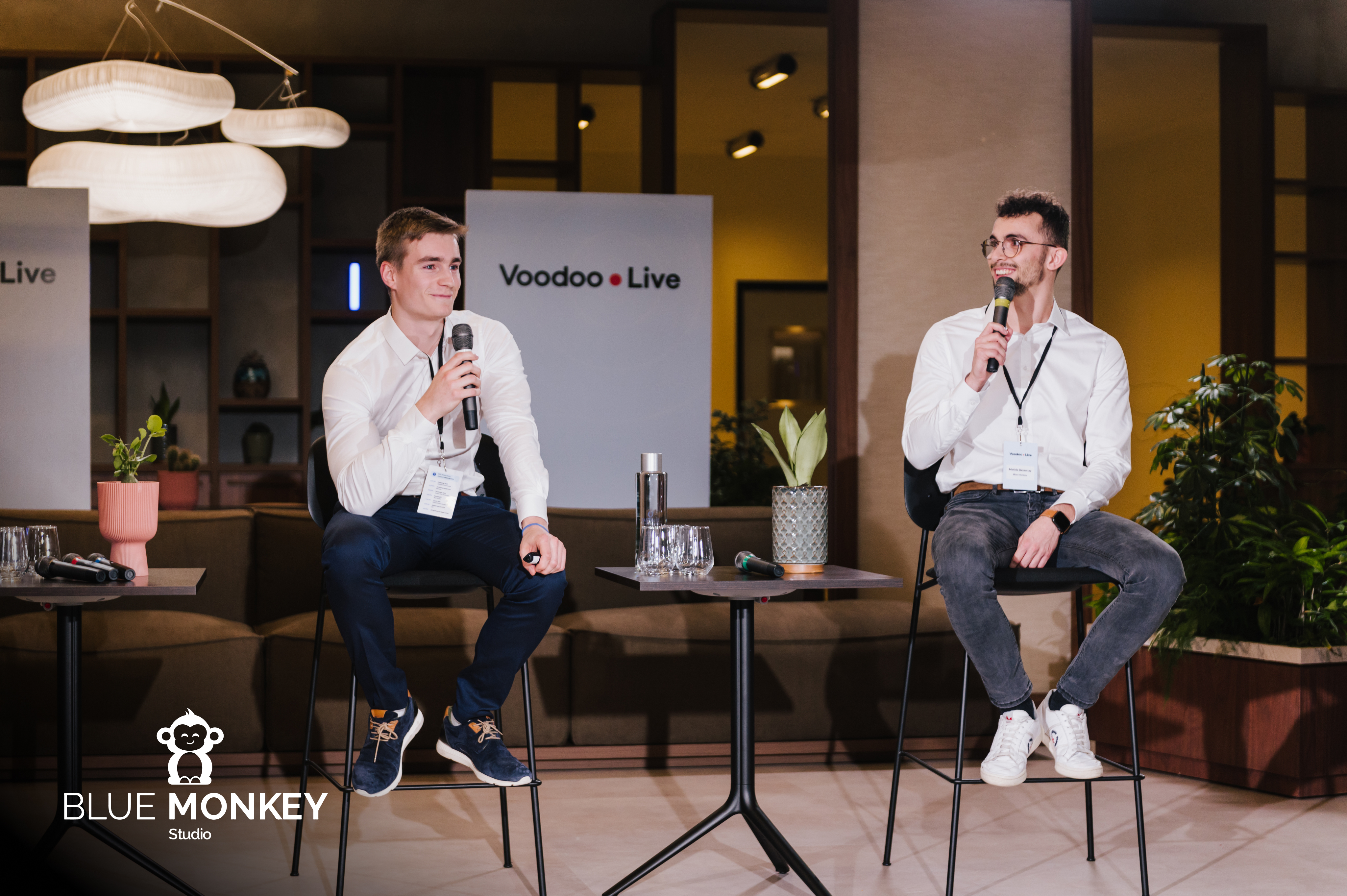 With no previous experience in gaming, let alone hyper-causal, the decision to launch Blue Monkey was a considerable risk in terms of time and effort. But, when they discovered hyper-casual, the two young co-founders found that the fast prototyping, data-driven mindset really appealed to them, “We felt like we already had a similar mindset, so it was exactly the kind of thing we were looking for”, Harvey said.

From December 2020 to August 2021, the two embarked on what they now refer to as a ‘marathon sprint’, learning as much as they could about hyper-casual and how to make a hit game whilst coming up with over 240 ideas and testing around 33 prototypes.

“Following Voodoo’s advice, we made sure we were ideating a lot more than prototyping so as not to waste time on ideas that wouldn’t make the cut. They helped us learn how to filter our ideas and only keep high potential ones to test”, Mathis explained.

“These 240 ideas were a mix of concepts, sketches, and fully-fledged ideas. It’s also important to note that from the 33 prototypes, we used every experience and every failure as a lesson to use in the next round. Everything was part of our learning process”, Harvey added.

For the 33 prototypes, the results were varied, with CPIs fluctuating between under 50c and over 2 dollars.

Coming up with a hit

In the first few months, the two-person team showed super promising skills and a strong mindset. With some hot prototypes in the mix, they were contacted by our Publishing team to join our coaching programme. During one of their sessions with Théophile Tabary, one of their Publishing Managers, the team got to discussing mechanics that naturally bring more depth to a game. Theo pointed them towards shapeshifting, a successful mechanic because of its levels of interactivity for the user. Even with no obstacles, each person can play the game differently and build up skills over time. Players will also focus on the mechanic itself rather than the level design, which takes pressure off creating enough diversity in levels, especially at the beginning of the prototype phase. A combination of this brainstorming session and inspiration from a recent shapeshifting hit, Couples Yoga, led to the birth of Flex Run 3D.

Flex Run 3D is an inverted runner - rather than the character moving through the level to reach the level end, the obstacles move towards you, which naturally increases the speed and intensity of each level. Players swerve obstacles by adapting the character’s position during a home yoga workout. The game uses a shapeshifting mechanic, swerve control, and the highly relatable theme of yoga at home.

With a well-designed mechanic and control, as well as naturally deep gameplay, the first version of Flex Run 3D hit high potential metrics: a 39c CPI, 30% D1, and 6-minute average playtime. For the second iteration, the teams added light contextualisation to make it easier for the player to understand what they had to do exactly and why. Adding a story always helps give context to the game and drive down the CPI, and here they opted for the complimentary ‘home yoga’ theme, adding home decor and obstacles. This helped the CPI drop to 29c.

All in all, the teams did very few iterations before launching, focusing mainly on reducing the CPI to help the game scale as effectively as possible.

Once launched, the Voodoo Game OPS team got to work optimising the game. They helped with game art, level design, and adding features that had the highest impact on the game’s metrics. For example, they added a new feature in which users could unlock new yoga poses, which would then unlock new obstacles, which helped bring diversity to the game so that both retention and playtime increased. They also worked with the studio to make the level ending more understandable for the player, so they have to match their form with the shapes in the glass. All this whilst keeping in regular communication with the studio and working together to level up the game. 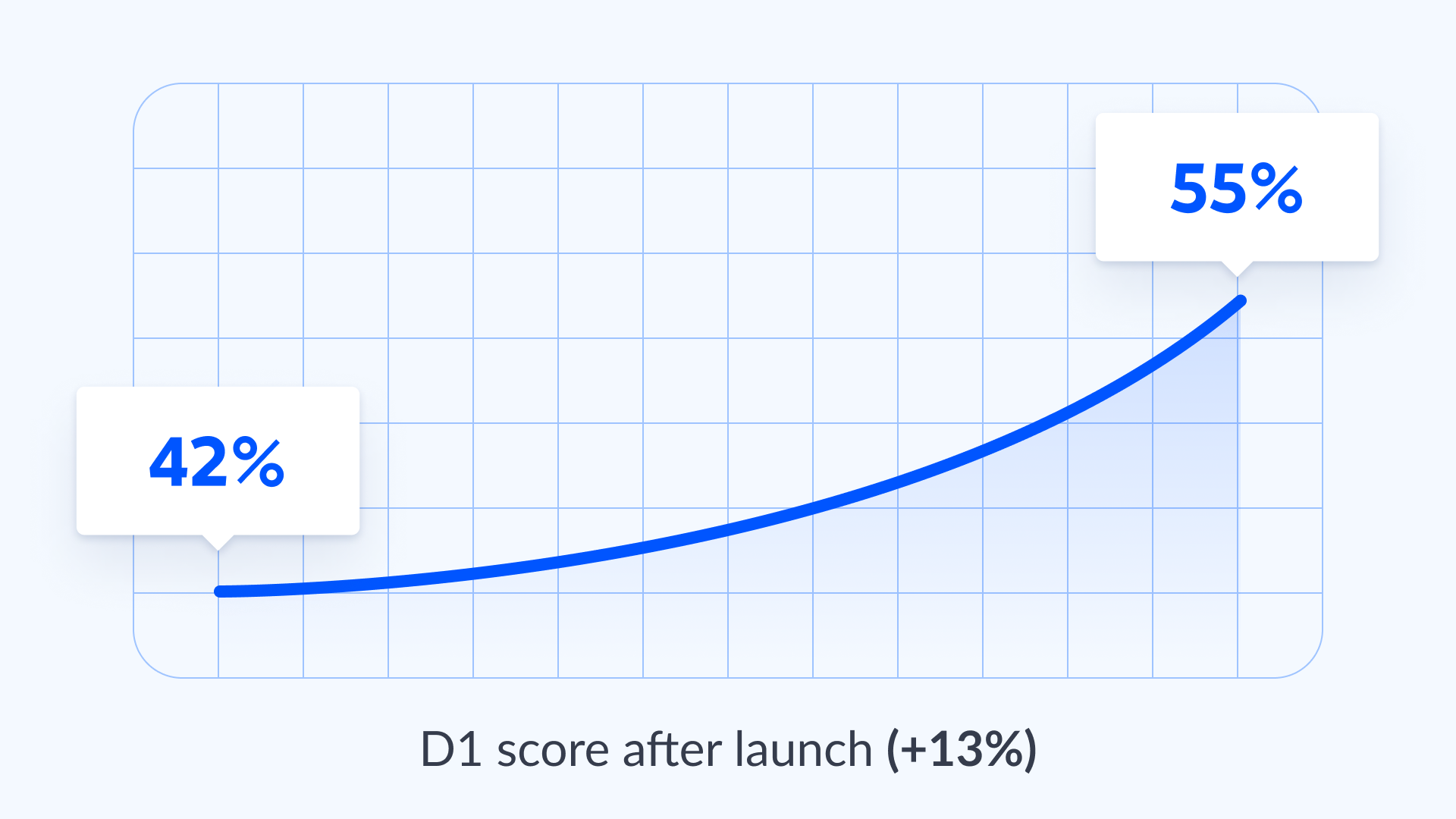 So how did Blue Monkey transform from a brand new studio with no knowledge or experience in hyper-casual to launching a hit game in just nine months? During their talk at the Voodoo Live event in Paris, they nailed it down to three key secrets to success.

Harvey: “We had no experience in game development before starting out in hyper-casual last year, so we just wanted to learn absolutely everything there was to know. We wanted to absorb as much information as we could about the industry and how to make successful games.  We developed an interest in everything hyper-casual; articles, live streams, guides and manuals, feedback from Theo, our Publishing Manager...  we absorbed everything”.

Mathis: “From the very beginning, we had one clear, very huge goal: to launch our first game. We were so determined to reach that goal, which translated into a lot of hard work, a lot of focus, and a lot of willpower during our marathon sprint. This also helped with our mindset and motivation; hyper-casual can be a challenging industry in terms of failure, but whatever results we had with our prototypes, we knew we’d get that launch one day”.

3. A strong focus on ideation 💡

Harvey: “We knew that ideation was the most important part of the process, so we set a time to ideate every day to make it a regular process. But we also ideate all the time outside of that designated time. If we’re going out to do mundane tasks such as shopping, for example, we’re always trying to think of game ideas. This has become super important because it trains your creativity, so whatever you see, you create a sort of filter in your mind that tries to find an idea out of whatever you are looking at”.

Theo added: “If there’s one thing that we can learn from their story, it’s how much your mindset is key to making it big in hyper-casual. With their focus on ideation and sheer determination, Harvey and Mathis are a perfect illustration of the mindset you need to succeed. Even without years of experience and key learning, the right approach when it comes to ideation and prototyping can help you launch your first hit game in less than a year. On top of this, two months after the full launch of their first hit, they’re already thinking about what’s next; they want to go further and make something bigger. I’m looking forward to seeing what’s next”.

To access all Voodoo’s hyper-casual training and resources, sign up below to start working with us today.

👉 The Blue Monkey team are also looking for a game artist to work on polishing their next hits! If you’re interested, you can reach out to them here.